Earlier this month, I had the opportunity to speak to a room of sixteen girls and eight guys about the history of women working in the field of animation.

Every year, I attend Shuto Con, the anime and Japanese culture convention here in Lansing, Michigan. Usually when I'm not spending money in the dealer room, I drift from lecture to lecture learning new tips and tricks about digital art, exploring some facet of Japanese culture, trying out new anime shows, or just having a good time photographing any ingenious cosplayers that catch my eye.

However, as I had been encouraged to speak at previous cons by the owner, this year I decided to toss my hat into the ring with a topic that I've been researching for several years: the history of women working in the field of animation.

I'm very fortunate that the con organizers are flexible regarding what seminar topics they allow people to speak on. They don't stick to a strict 'Japan only' philosophy as the resulting variety helps distinguish them from the other anime cons--both large and small--that are here in Michigan.

Shortly after the seminar topic was proposed to and accepted by the convention, I put out some feelers on their Facebook page to get a sense of how well an event like this would be received. Needless to say, I was pleasantly surprised by the number of girls (and guys) who responded positively. Two short months later found me standing in front of a group of people eager to learn. 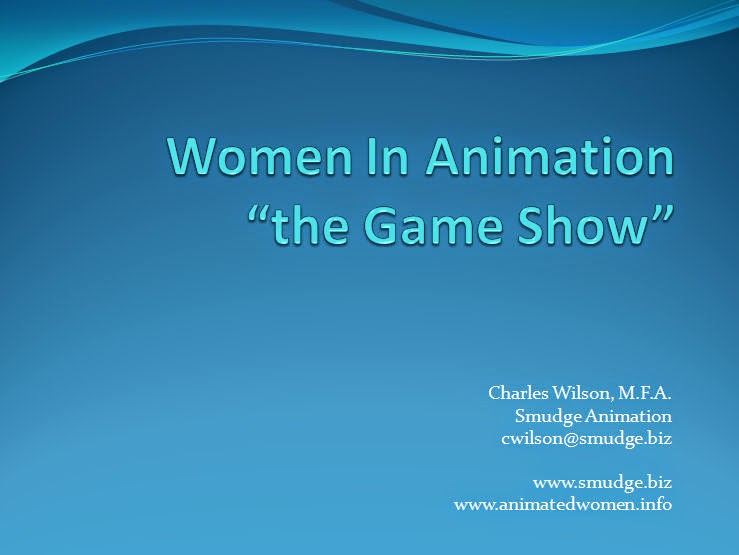 In order to liven up what could have been a very dry lecture, I decided to go with a game show format. The audience was asked three questions about a woman animator (both historical and contemporary), her career, and/or elements of work she was involved in that made it into popular culture. At the end of each animator's section, I'd recite two or three quick sentences about the animator that expounded upon the information presented in the questions. 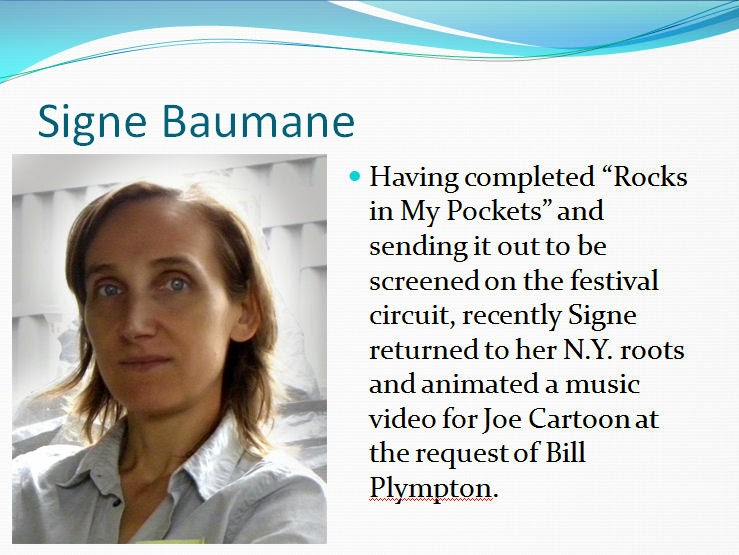 In order to encourage audience participation, I relied upon advice from my mother when she said: 'chocolate is the great motivator!' People who answered questions correctly received a snack-sized Hershey bar as their prize. And people who answered questions incorrectly received a fireball jawbreaker. In reality, I just wanted to remove the stigma of being wrong and encourage everyone to participate and take a chance on answering a question even if they weren't sure that it was the correct answer.


When asked about the projected attendance numbers for this event, I gave a very optimistic 'twenty to thirty' people, figuring that I'd probably only have ten or twelve people showing up, including my four friends who would be there just to support me. I was very pleasantly surprised when an additional twenty people showed up and I received messages from a couple girls who said they wanted to attend but couldn't due to scheduling issues.

The seminar only lasted forty-five minutes (not including five minutes for Q&A), but I was able to cover twenty-five animators and touch on some notable elements of their careers and background. And when the lecture was over, eighteen of the attendees stuck around to watch a screening of animated short films that were either produced by women animators or had women animators working on the films--like Lillian Friedman Astor, the first woman to work as an animator for an East Coast studio or Lynn Dana Wilton's cut-out animation "(re)Cycle".

This being my first time presenting this lecture, it went over far better than I had hoped. And as I have been gathering copious amounts of information on women animators, you can be sure that I'll be shuffling the line-up and proposing this panel for next year's con.

Oh, and for those who attended, the following are the questions that were raised in the panel for which I did not have immediate answers for:

1. Will Vinton, spells his name with two letter l's not one (source: http://willvinton.net/).

2. Magic Boy (Japanese title: Shônen Sarutobi Sasuke) was produced in 1959 by Tōei Dōga (not Mushi Pro) and released in Japan. It was re-released in 1961 by MGM in the United States (source: http://cartoonresearch.com/index.php/early-anime-features-1958-1960).

3. The longest running television animation series in history is Sazae-san ("Mrs. Sazae"). Sazae-san has been running continuously for over 43 years. According to animation historian Fred Patten, this translates into "more than 2,300 half-hour shows (shows are split into three segments so there are over 6800 shorts made)." (source: http://cartoonresearch.com/index.php/the-longest-running-tv-cartoon-ever/).
Posted by Charles Wilson at 8:09 PM 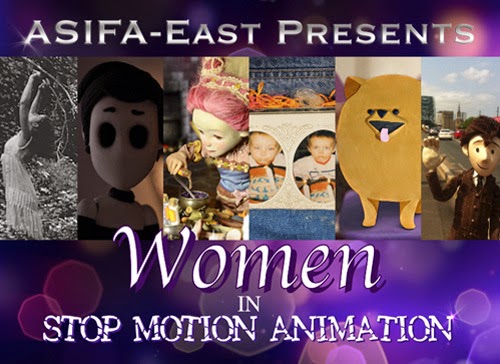 If you're in New York this week, on Tuesday night at 7 p.m., ASIFA East and the School of Visual Arts will be hosting a panel discussion on 'Women in Stop Motion Animation.'

"ASIFA-East presents a panel discussion with 6 innovative artists in the field of stop motion. Our guests include

The panel will be moderated by Careese Singh (CBS College Sports Network) and has been organized by Robert Lyons (Media Arts Prof. at Univ. of Arts, PA).

Each artist will give a little presentation on their work, and there will be plenty of time for questions. Join us for an unique opportunity to learn more about the challenges women might face in the workplace, and to learn about the secret magic of stop-motion. 4/22 SVA Rm 502 7pm"

More information can be found on the ASIFA East website at: http://www.asifaeast.com/asifa-east-presents-women-in-stop-motion/. And if you're planning on being there, feel free to RSVP on their Facebook event page.
Posted by Charles Wilson at 7:53 PM

With five hours to spare, Dawn Brown has made her Kickstarter goal!! House of Monsters will receive the $20,000 that it needs to produce their stop-motion web series!!

Thank you to everyone out there who took the time (and money) to support this animation project.

Posted by Charles Wilson at 2:28 PM

It's the last day of Dawn Brown's "House of Monsters" web series Kickstarter campaign and she's only $1916 away from meeting her $20,000 goal to bring this series to life! I've upped my pledge amount to the $25 level in order to help Dawn meet her goal. If you're as interested as I am in helping women animators tell their stories, please consider making a pledge if you haven't already or upping your pledge if you can. Every little bit helps, even $1. If we all work together, we can help bring original content produced by women animators to the screen.

On April 7th, Cartoon Brew published an article about the Barbicon art centre's event focusing on the career of Joy Batchelor that happens on Sunday, April 13th as part of the Bird's Eye Festival.

Now most of us who live across the pond will miss out on this celebration of the woman who co-founded one of the largest animation studios in Great Britain (Halas and Batchelor). But fortunately, a new book about Joy Batchelor will be published on May 15th, 2014 titled: "A Moving Image: Joy Batchelor 1914-1991: Artist, Writer and Animator". 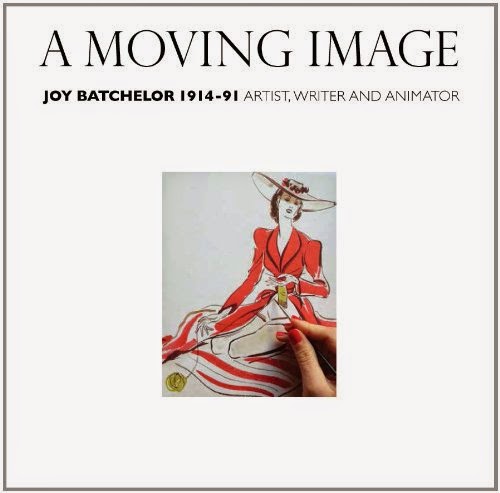 While attendees of this event will have the opportunity to purchase advance copies, the rest of us will have to wait until after May 15th to get ours. Currently, Amazon UK is accepting pre-orders and it appears that Amazon US may be taking pre-orders after April 17th, if I'm reading their website correctly.

Co-authored by Vivian Halas (Joy and John's daughter), this book clocks in at 100 pages and is priced at a very reasonable 20 pounds (approximately $33.50 USD), the book can be pre-ordered via the following links: Amazon UK or Amazon US.

The description of this book on the Amazon UK website is as follows:

"Joy Batchelor, Britain's most important woman in animation history, this celebrates her work, her life and her legacy. Her forty year career as first an animator, then, writer, producer, director and joint creative head at what was one of the biggest animation studios in Western Europe, has never been matched. Joy Batchelor was also a teacher and an internationally recognised authority on the global animation scene.

'Halas and Batchelor gave us all the lead. In our early days at Aardman we could only dream of aspiring to their stature. In their heyday, the studio was renowned for innovation and creative ambition, always experimenting with technique, form and style. At the heart of the company, Joy Batchelor's writing, direction and design, especially on Animal Farm, has earned her status as one of the true pioneers of British animation.' - Peter Lord Aardman Animation

'Joy Batchelor was one half of the celebrated/famous animation studio, Halas and Batchelor, responsible for over forty years of ground breaking animated films, including the first British cartoon feature, Animal Farm. This is the story of the life and work of one of animation's unsung heroines.' - Brian Sibley Author, broadcaster and film critic."

So keep your eyes open for this one and check the Amazon US link on (or after) April 17th unless you don't mind paying for the overseas shipping.

Additionally, "Halas & Batchelor Cartoons: An Animated History" also co-authored by Vivian Halas is still available on Amazon (both UK and US). 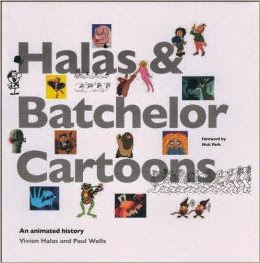 And lastly, Skwigly Online Magazine has an interview with Vivian Halas in their latest podcast where she discusses the history of the Halas & Batchelor animation studio. The podcast (#20 released on 3/31/2014) is accessible via iTunes or on their website. The Halas & Batchelor section starts around the 1:41:38 mark.

So if you're interested in the history of UK animation and specifically that of this very talented woman animator and businesswoman, consider adding the two books listed above to your collection.

Special thanks to Neil Emmett of Cartoon Brew for bringing this book to my attention.
Posted by Charles Wilson at 3:03 AM