Animated Thoughts "A History of Women in Animation: Mothers of a Medium"

Recently, an article was published on the Mary Sue by my friend Carrie Tupper regarding the history of women working in the field of animation. In looking at her article, it became very clear that she and I have run across a lot of the same websites and have encountered a lot of the same frustrations on validating information. I agree wholeheartedly about how difficult it is to find reliable information on women animators. The info is out there, but it is spread out among many disparate sources. To that end, I have an entire bookcase dedicated to books, journals, magazines, and binders of printed out internet articles that attest to how scattered this information is--many of the books only have a couple sentences of valuable information. But, getting back to the article, after contacting Carrie, I have some extra information from my own research that others may find edifying and it really illustrates the difficulty in researching this subject.

2. A Picture of Lillian Friedman Astor:
Here's a picture of Ms. Friedman Astor, it's on page 65 of Shamus Culhane's book "Talking Animals and Other People", 1986. After finally tracking down a used copy of this long out-of-print book (thank you Amazon.com), I only found two pages out of 463 that reference Lillian!


3. Kazuko Nakamura
When you look for information on women in the Japanese animation industry, you then have to add the complexity of dealing with a foreign language. This one is pretty minor, but my research indicates that Kazuko Nakamura started at Nichido Studios in 1956 around the time Nichido was bought out and became a subsidiary of Toei Dōga. A minor quibble to be sure, but for a forensic animator like myself, still worthy of further investigation to nail down that fact once and for all.

4. Reiko Okuyama
For those interested in learning more about Reiko Okuyama's career--and what the anime industry was like for her back in the fifties and sixties--I recommend Jonathan Clements' recently published book "Anime: A History", specifically chapters 5 and 7 and the footnotes from chapter 5. There are some really great nuggets of information to be mined from Mr. Clements' research regarding the life and times of Reiko Okuyama. However, if you only want the info on her, I recommend checking out the book from a library instead of buying it outright as Clements' book is 250 pages and only a handful of them reference her directly.

5. Brenda Banks
Carrie's article makes the claim that Brenda Banks was the first female African-American animator--a belief that I held up until recently. After spending months mining for data, I was able to find information that now leads me to believe that the title is currently a three-way tie between Brenda Banks, Jackie Banks, and Dr. Ayoka Chenzira. Using sources that include personal webpages, web forums, IMDB, and the Ralph Bakshi interview, I found dates ranging from the late sixties to the early seventies.

Furthermore, the Ralph Bakshi interview directly contradicts the IMDB entry for Brenda Banks. If IMDB is right, then Brenda may indeed be the first female African American animator. If Bakshi is right, then she may not have been. And then we have to deal with the references that Jackie Banks worked for Bob Clampett as well as Dr. Chenzira's claims to have been experimenting with animation in her personal films back in 1971. So, further research is necessary to break this three-way tie--research that I'm working on, but it's very slow going. And unfortunately, Jackie Banks died back in 1995. So it does raise the complexity of further study. On the bright side, Dr. Chenzira is still teaching at Spelman College and I have a lead on where Brenda Banks is currently residing, so hopefully, the answer to who was the first female African-American animator will be conclusively determined in the future.

And one minor issue:
The article as written, ah, well Carrie's ironic sense of humor comes through and adds a tone that may come off as a little divisive to people who don't know her. At the last Ottawa International Animation Festival, I had the privilege of sharing a wonderful dinner with Carrie (and her husband Alan). They're both very warm, funny, and welcoming so I hope that her injections of sarcasm here and there do not diminish the credibility that her work has as a scholarly article. The industry as a whole needs more people with an interest in collecting and disseminating this information.

My personal belief is that it's extremely important to share how difficult it was for women working in the field of animation, especially back during the "golden age" (and in many cases still today). This fact is driven home when you sift through volumes of data written by authors who may not have known or even cared to write about what struggles women faced when starting out in this industry, or chose to gloss over the facts or give them a 'boys will be boys' spin on things. It's very easy find yourself wondering if things are actually getting any better (see Carrie's next article for more on that question). So at times like this, I like to keep in mind a quote from Rita Street about why she opened up WiA's membership to men:

"To help break the glass ceiling in animation for female artists, we would embrace the opposite sex and prove that together we could rise above issues of gender, race and handicaps."
'Women In Animation: Changing the World: Person by Person, Cel by Cel' by Rita Street
Animation World Network Magazine 1.2, May 1996
(emphasis mine)

The History of Women in Animation is a tough subject to discuss due in no large part to the passionate nature of the issues that are raised especially when compounded by the dearth of reliable information--and it holds within itself the potential to be very divisive. Carrie did a great service to the topic by posting parts of both the infamous Disney rejection letter as well as the direct quote from one of Walt's speeches at the beginning of her article showing that history is never as clear cut as we would like it to be.

All in all, the article is an excellent starting point for further research on the subject--especially for students. I agree completely with Carrie when she stated that women animators need to step forward and take credit for their triumphs (it would definitely make my research into the topic easier *grin*). Having had the opportunity to read a preview copy of Carrie's next article (and add a little information of my own) where she discusses more contemporary female animators, I can say that you're all in for a real treat!

And if you have the chance, while waiting for her next article to go live, check out Carrie and Alan's personal animation project: Kamikaze.
Posted by Charles Wilson at 7:50 PM 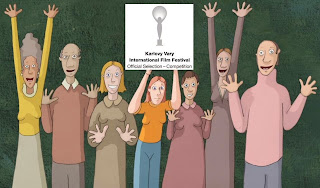