Executive Producer of Cartoon Network's "Hero:108", Founder of Women in Animation, and President of her own company 'Radar Cartoons', Rita has taken time out of her busy schedule to encapsulate over two decades of experience in the entertainment industry creating, pitching, and developing animated shows for children. Her book covers the process of series development from brainstorming to final pitch--including some very important, entertainment industry specific details that I have rarely seen in other sources outside of festival workshops: like the importance of 'Loglines'. Or the differences between a 'Sales/Pitch Bible' and a 'Production Bible' and where is each used and why. Or even lessons on etiquette when you've finally received that coveted pitch meeting (hint: one of the most important is "Do your research!" There's a lot more to it than that, but I'll let Rita explain that in Chapter 5).

"During the last decade I’ve landed more than 1,200 pitch meetings with network and indie development execs. Of those 1,200 pitches I’ve sold a record 15 shows into development, four of which have come out of development and into production.

This is literally my brain-download on how to develop an animated comedy TV series for kids 6-11 years of age (think: “SpongeBob SquarePants”).

If you want to pitch a show that has real potential for a sale, follow these secret rules."

While her focus is on the kids market, a lot of the advice I've read so far can be adapted to developing an animated series for other age groups. Best of all, she is currently giving away a PDF version of her book for free--a great price for all you animation students! So don't wait, head over to her website and take advantage of her knowledge and experience to help develop your own animated series.

You can download her book from the following link. 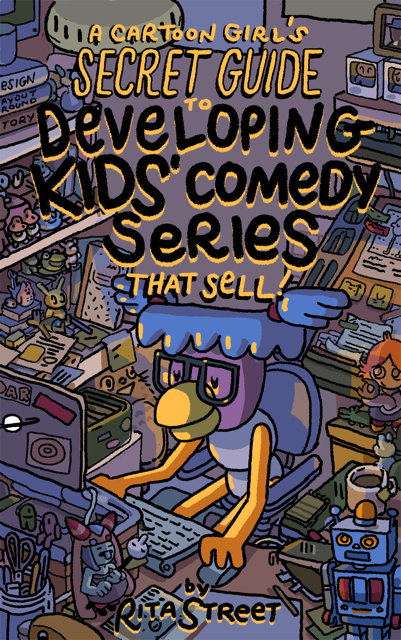 * images are copyright Rita Street and used with permission.
Posted by Charles Wilson at 7:10 PM