So back in September 2013, Lynn Ferguson gave a talk for the Moth Radio Hour and it was just added to their website last week. In this particular talk, Lynn relates a story about her experience of getting pregnant for the first time at the age of 37. What does this have to do with animation? Well, once you hear that rich scots burr, you'll recognize Lynn as the voice of brainy, bespectacled chicken 'Mac' from Aardman Animations' film "Chicken Run". Hers is not a story about animation per se, but it's a great story nonetheless told by a master storyteller and performer.

Lynn Ferguson's talk can be heard at the following link: http://themoth.org/posts/stories/before-Fergus.

So back on April 13th, the Barbican Art Centre held a event on the career of Joy Batchelor as part of the Bird's Eye Festival.

The event "Joy Batchelor - An Animated Life" apparently showcased clips from films that Joy had a hand in during her time as the co-owner of the British animation studio 'Halas and Batchelor', followed by a panel discussion.

Well, Joy's daughter Vivien Halas has recently released two videos on her YouTube channel from this event. The first is a two minute introduction to the screening and the second is the almost hour-long panel discussion of Joy's career and influence featuring Brian Sibley, Clare Kitson, Jes Stewart and Vivien Halas--all contributors to the book "A Moving Image".

The introduction is below, and the panel discussion follows.

During this event, they released the book on Joy Batchelor's life and career titled: "A Moving Image - Joy Batchelor 1914-91 - Artist, Writer and Animator". 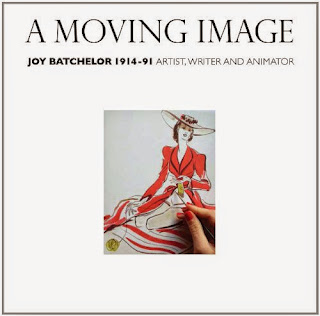 I recently bought my copy via Amazon for $25.23, which included the cost of shipping the book overseas. Amazon apparently doesn't have these in stock here in the USA, however they're being sold from a third-party seller in the UK. I can attest to the fact that the price was more than fair, the packaging excellent, and the shipping time was very fast (from the UK to Michigan).

While I've only just started reading it, I can state that it's a lovely book with a clean, easy-to-read presentation of Joy's history filled with her illustrations and pictures from her animations. The book is basically a collection of six essays written by six different authors--including Vivien Halas--that cover Joy's life and times. I'm not finished devouring this book yet, so I'd rather not go into too much detail, but suffice it to say, one of the things that I really appreciate is that on pages 80 to 84, Vivien has included a filmography/spreadsheet of Joy's body of work that details what role she played on each film production.

100 years ago today, on May 12, 1914, Joy Batchelor was born. To commemorate this event, Skwigly Online Magazine has put together a wonderful article that collects photos of Joy, some shorts that she produced, a list of screenings of Joy's work, a link to the new 'A Moving Image: Joy Batchelor' book, and a short film produced by her daughter Vivian Halas and London Animation Club member Martin Pickles.

The video, 'Ode to Joy', is only four minutes long, but is a fantastic introduction to Joy's career in animation.

You can find the article here on their website:
http://www.skwigly.co.uk/happy-100th-birthday-joy-batchelor-ode-joy/

If you have a chance, it's well worth a look.

* photo from BFI website:
http://www.bfi.org.uk/news-opinion/news-bfi/features/born-1914-seven-great-filmmakers
Posted by Charles Wilson at 9:59 AM