NOTE: This post originally appeared on my Smudge Animation site on March 9th, 2010.

Martine Chartrand was born in Montreal in 1962. During her college days, she discovered animation while studing fine arts at Concordia University. After working in the television and film industry , she hooked up with the animation co-op "Ciné-clic". At Ciné-clic, Martine worked on animation projects while teaching workshops in creating backgrounds. She later joined the National Film Board of Canada working as a colour artist and collaborating on films. In the early '90's, Martine directed her first film "T.V. Tango". Also in 1990, Martine first saw "La vache" by Alexander Petrov, which inspired her to travel to Russia for four years as she studied paint-on-glass animation under the Russian master animator. From 1993 to 2000, Martine created her paint-on-glass masterwork "Black Soul", the story of an African-Canadian grandmother telling her grandson the history of the African people in North America. "Black Soul" went on to win twenty-two awards worldwide including Berlin's "Golden Bear" award and Indianapolis' "Crystal Heart" award.

Martine animates her films using a modification of Petrov's paint-on-glass style of animation. While Petrov uses a specific brand of bicycle grease that is very difficult to obtain in the west, Martine found an inexpensive, easy to obtain brand of industrial grease that, when mixed with paint, prevents the paint from hardening and doesn't change the color of the paint. The film is then animated, frame-by-painstaking-frame as she manipulates the paint, effectively destroying the contents of the previous frame to create the next frame.


Martine was part of my first experience at a workshop for the Toronto Animated Image Society. I didn't know what to expect so I went with the most humble attitude I could muster and a willingness to learn anything I could. To say that Martine made learning easy is an understatement of epic proportions. Martine is this little bundle of positive energy who spent Saturday night showing us her and Petrov's films and explaining the paint-on-glass technique. And on Sunday, she ran from workstation to workstation, watching what we'd produced thus far, showing us new techniques and providing encouragement as we struggled through a trial-by-fire with learning this new style of animation. By the time the workshop was over, and Martine was heading out for the train, none of us wanted to see her go back to Montreal. That weekend was my first experience with a TAIS/NFB workshop, but as I drove back to Michigan (invigorated from my experience and ready to animate), I knew it wouldn't be my last one. 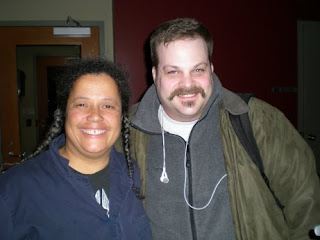 During the workshop, I was paired up with this sweet young high-schooler who introduced herself as 'Chevron' (which she pronounced shee-vah-roh). During the next eight-plus hours of the workshop, we created this film by alternating back and forth under the light table where one of us would animate while the other would make thumbnail sketches for the next sequence, and vice-versa. The wave and flowers sequence became the inspiration for one of the films that I'm currently storyboarding.

Posted by Charles Wilson at 3:00 AM