The Women of SoFA 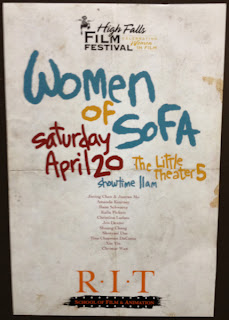 Last weekend I attended an event at the High Falls Festival in Rochester, New York. The High Falls Festival is unique in that it showcases films created by women. Now, I'm going to sidestep the debate on whether exclusive festivals help or harm the community and leave that discussion to others, like Ottawa International Animation Festival artistic coordinator Chris Robinson. Recently he posed that question to a group of female animators and posted the resulting conversation on Animation World Network. You can read the article "here" on the AWN website. While there are good arguments both for and against exclusive festivals, suffice it to say, I personally am in the camp that thinks it's hard enough for independent filmmakers to get exposure, so you take any opportunity to get your film seen by an audience that you can get.

The particular event I attended at the festival was notable in that it featured live-action and animated films created by women filmmakers from R.I.T.'s School of Film and Animation. So, knowing that there were already several things that I wanted to do in Rochester, I decided to add in 'supporting my little sisters' and made the fourteen hour, round trip drive out to my alma mater. (1)

There were several standouts in this collection of very solid performers, so rather than review them all, here are a couple of my favorites from both the live-action and animated films selection. If you'd like to see what films were in the program, you can read the entire program at the High Falls website

This film made me squirm in my seat. Don't get me wrong, I enjoyed the film and really appreciated what Ms. Chen and Ms. Mo were trying to say, but the sexuality in their imagery was... not what I was expecting to see from women filmmakers. This was a classic 'mouse that roared' story where a shy and reserved woman who doesn't fit society's stereotypes of beauty allows herself to shine and revel in her smouldering sexuality. I like this film, not for it's sensual imagery, but because it's one of those moments where you get to see how women see each other and themselves, from their perspective--including all the insecurities, body image issues, and comparisons that they make with themselves and each other--exaggerated though it may be in this animation.

Ms. Chen and Ms. Mo have posted their film on YouTube (which you can watch below) and have also created a website describing how they made their film, which can be viewed at: themakingofaudition.wordpress.com.

"Bummer" was the story of a man who is standing on a bridge and contemplating suicide due to a string of failures in his life when a stranger arrives to offer him some perspective. I don't want to say more about the story because it's something that you really need to watch for yourself. Rather, what struck me was the production quality of the film. Student films can be hit-or-miss, I know that my foray into live-action certainly was. But Ms. Dexter clearly paid attention to a lot of detail in this film. The lighting, camera angles, and sound were spot on. I remember these being some of the hardest things to consistently get right during filming under a controlled environment and here Ms. Dexter makes it look effortless--and does it while filming outdoors!

"Bummer" can be viewed on the CIAS "SoFAtube" website.

Soap was just a fun animated film all around. It has this nice National Film Board of Canada feel to it--both in story and in character design and layout. The characters are muddling through their drab, dreary lives but all it takes is something as small and inconsequential as a used-up piece of soap to brighten their day and help them forget all their troubles.

"Soap" can be viewed on the CIAS "SoFAtube" website.

Here I am again, dealing with the fact that I don't like Jazz, but completely immersed in a film about Jazz--much like when I saw "Chico and Rita" at the Waterloo Festival for Animated Cinema. "Remembering the Pythodd" appealed to my inner history buff not just because it was the story of a nearly forgotten piece of Rochester's history, but just like "Bummer", the production quality was stellar. Ms. Chapman Decosta's twelve minute film was on a par with the documentaries I routinely see on PBS. Even if like me, you're not into Jazz music, "Remembering the Pythodd" is still well worth twelve minutes of your time.

"Remembering the Pythodd" can be viewed on the CIAS "SoFAtube" website.

1. For those interested in the highlights of that trip, I recommend you navigate to the blog post: 'Animated Thoughts: Serendipity and Research' on my company website, Smudge Animation.
Posted by Charles Wilson at 2:12 PM