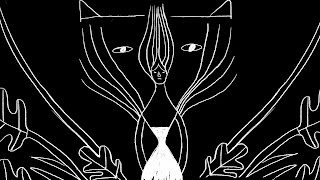 From her press release:

Schreiber has magically brought to life Saint Joan’s melodies of love and loss, memory, time and redemption. The video is broken into animated loops inspired by key lyrics in the song. Refined and edited together with connecting animation, the video is seamless from start to finish like an infinite loop.

Created digitally as two-dimensional frame-by-frame animation, a tablet and stylus was used to draw each frame and although it's far from analogue, Schreiber was able to hold onto the warmth and charm of traditional animation, as each frame is lovingly hand sketched. Schreiber shot the live action component in Sydney and worked on the animation from New York.


Lucinda has directed, animated and illustrated numerous projects for clients including Gotye, Saks 5th Avenue, Coca-Cola, NPR, Telstra, MidnightJuggernauts and Kotex. She is represented by Photoplay Films in Australia, Asia and the USA."
The video is below, check it out and when you're done, visit her website to look at some of Lucinda's other work.


Telstra "It's How We Connect" from Lucinda Schreiber on Vimeo.
Posted by Charles Wilson at 11:56 PM