It's March 8th, which means it's both Women's History Month and International Women's Day. So let's start out with a little history about women animators! 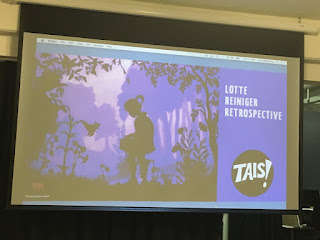 Back in November 2018, I drove out to Toronto to see a special screening of films by Lotte Reiniger including the rarely seen English version of Aucassin and Nicolette (which she produced for the National Film Board) and the even rarer Ring and the Rose (independently produced for Gordon and Patricia Martin), from an old 16mm film copy.

The event was hosted by Jonathan Culp at the TAIS Studios on Dufferin Street. And after an introduction by Jonathan, and a showing of the latest silhouette animation workshop film by Lynn Dana Wilton, the following films were shown:

Afterwards, we retired to the "Lotte Studio" where Jonathan talked about the history of Lotte's trick-table, how it came to be in his possession (along with a large amount of "animation artifacts" from Lotte's time in Canada) and what led up to his decision to donate the table to the Toronto Animated Image Society.

Jonathan then placed a plaque on Lotte's trick-table to commemorate both her and the Martin's contribution to animation. The dedication video is presented below:


Now, if you would like to have an animation experience that touches upon a part of animation history, specifically the history of women animators, I would like to recommend a trip out to the Toronto Animated Image Society (tais.ca). TAIS has made Lotte's trick-table available for members to rent for their own animated films. Located at the TAIS Studio on Dufferin Street, the table setup comes with a digital camera, a Macintosh computer running DragonFrame, and a bottom-mounted set of lights. Studio Membership costs at TAIS are reasonable as are the rental fees for using the Lotte Studio.

Back in September, I was blessed to spend a day working on a silhouette film using Lotte's table before driving to the Ottawa International Animation Festival. And while I wouldn't call it a "religious experience" per se, it certainly was a very gratifying experience to work on an animation using a piece of animation history that was built by and used by a titan of animated film. If you have the time, I highly recommend the experience.