I had heard from a friend of mine, Lynn Dana Wilton, that the Toronto Animated Image Society had acquired a light table used by Lotte Reiniger to produce her films during her short stay in Canada back in the 1970's (though Lotte called them "trick-tables").

Questions abounded: was this the desk that she used at the NFB? If so, did the NFB give it to TAIS, and if so, how did that come about? What did the desk look like? Did she have it built from one of her previous designs? Or from the diagrams in her book Shadow Theaters and Shadow Films? And most importantly, during Lynn's upcoming silhouette animation workshop, would I be allowed access to the desk in order to take photos and measurements? 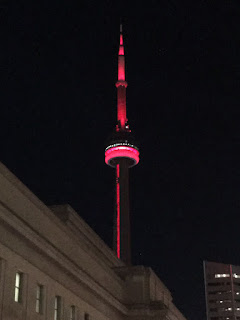 Well, the only way to find the answers to my questions was to go there. So I registered for the event, gathered up my gear, made arrangements for lodging in Toronto, and drove to Ontario for the weekend.

Lotte Reiniger produced two films when she was in Canada. The first was Aucassin and Nicolette, which she created for the National Film Board of Canada. The second was The Rose and the Ring, produced for Gordon Martin and Associates Limited and the Canadian Broadcasting Corporation.

This was the trick-table created for Lotte and that which she used to create The Rose and the Ring.

When I arrived at TAIS's production facility on Dufferin Street, Lynn escorted me back to Lotte's trick-table. She and I agreed that day: Lotte’s trick-table is both overwhelming and underwhelming at the same time.

It's underwhelming because it doesn’t look like anything special at first glance. But if you know the history of who it was built for, it leaves you standing there with a sense of awe. Lynn joked about how she was expecting little animation faeries flying around the trick-table. Personally, at the very least I was expecting a golden plaque with the words “Lotte Reiniger animated here” emblazoned on the side.

But there it was, and there we were. Face to table with a part of animation history.


It wouldn't be until later that Lynn would introduce me to the table's previous owner: Jonathan Culp. Though it was over the internet, I had the pleasure of talking with him. Jonathan patiently fielded all of my questions regarding the table.

What he told me was how his grandfather, Donald Carman of Carman Educational Associates was one of the main people in bringing Lotte to the National Film Board of Canada back in the 1970's. Although, it was one of the producers of Lotte's two films, Gordon Martin, who had the table built for Lotte. Gordon was also a family friend of Jonathan's. And before they died, Gordon and his wife Patricia gave the trick-table to Jonathan. Patricia herself was an animation assistant on Lotte's film the Rose and the Ring and she created her own silhouette animation on the trick-table, titled the Princess and the Pig Boy. Though he didn't know for sure, he believes that the trick-table was built by the Martin family--however he's going to ask one of the Martin's children for more details in the not too distant future.

Well, Jonathan, being a member of TAIS, generously donated Lotte's table to the organization.


And there it sits. A piece of animation history that has been given a new life with a new generation of animators using it to create their films…

While everyone else was making their silhouette puppets--and during my turn to animate on the table--I was crawling all over Lotte's trick-table with a camera and a couple of tape measures, taking photographs and making sketches, measurements, and designs of her trick-table... my intention being for it to be the subject of a future blog post. 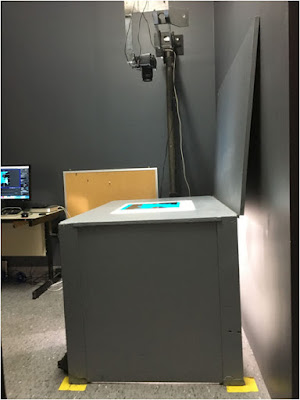 Well, rather than put together an elaborate puppet with hinged joints, I've had visions of PES's deep sea animation running through my head, so I decided to do a little substitution animation instead of using a fully-jointed silhouette puppet. That and I wanted to spend more time sketching and measuring the table.

After I left the studio that evening, I already had future plans running through my head.

Membership at the Toronto Animated Image Society, a Studio Membership, costs $50 Canadian per year. But with this membership level, it offers you the perk that you can rent their studio facilities to work on your own films. In this case: the "Lotte" Studio which costs $20 per day.

I’ve already planned a return trip to Toronto in the Fall. And as I’m a member of TAIS, I can rent Lotte’s trick-table for the day for the measly sum of $20 Canadian.