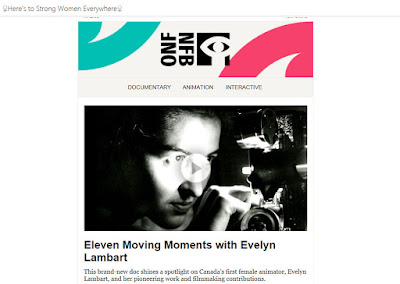 So back at the 2017 Ottawa International Animation Festival, the National Film Board of Canada showed up with a documentary showcasing Evelyn Lambart, the "First Woman of Canadian Animation" (produced by Donald McWilliams). Often overlooked due to her close working relationship with filmmaking powerhouse Norman McLaren, Evelyn Lambart was a gifted animator in her own right and McWilliams' documentary showcases this seriously neglected facet of Canadian Animation history.

Well the other day, as fate would have it, I received an e-mail from the NFB (I'm on their mailing list) stating that they've finally released said documentary on their website. So I'm very pleased to be able to share it with you.

Eleven Moving Moments with Evelyn Lambart, Donald McWilliams, provided by the National Film Board of Canada

Additionally, on the NFB's website, they've written a blog post titled "The Life and Times of Evelyn Lambart" that serves as a good overview of her life and career and introduction to the documentary. I encourage everyone interested in animation history to read the article and then watch Eleven Moving Moments. However, if you'd like to skip the blog post and jump right to the documentary, it can be viewed on this blog post via the embedded video, or on the NFB's website at the following link: Eleven Moving Moments with Evelyn Lambart.

And if you have the time, I also recommend reading Carolyne Weldon's article on Evelyn: "Watch 6 Stunning Shorts by the First Lady of Canadian Animation". In Carolyne's article, you can watch several of Evelyn's films in their entirety including The Lion and the Mouse, The Hoarder, Fine Feathers, and The Town Mouse and the Country Mouse--which is reportedly the last film that she produced for the NFB.

Evelyn Lambart died on April 3, 1999 leaving behind a filmography that includes some classics of cinema that were produced with Norman McLaren as well as an amazing body of animated films of her own creation. Many decades later, "the First Woman of Canadian Animation" is finally starting to get the long overdue recognition that she rightfully deserves.